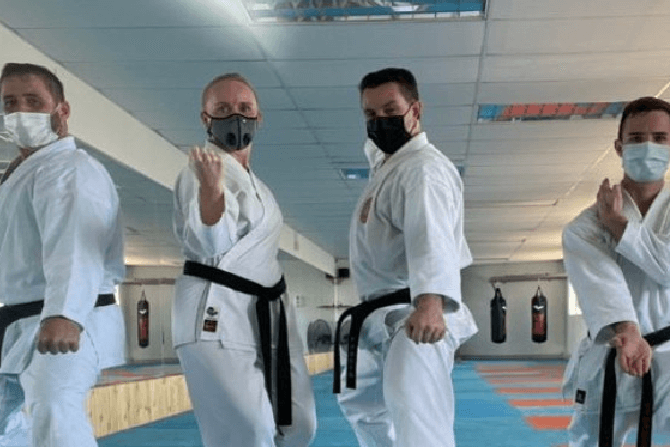 On 10 April 2021 we had the privilege of attending a zoom class with Kawasaki Sensei. For me, it was a class where the focus was on going back to basics, with the emphasis on proper technique. Kanku Dai was used as a base for the class after warm-up. Hips were core in the execution of almost all moves to ensure weight transfer and alignment is correctly achieved. The focus was placed on understanding the central axis of your body and how it impacts the final placement of a position. Correct posture and being able to spin around this axis of your own body was essential for well-executed turns and weight transfer which Kanku Dai has a multitude.
Kawasaki Sensei took each movement and broke it down into the elements to achieve maximum output and perfection in the execution. Repetition, repetition and once again repetition is essential to establish the movement. The movement then further needs to be executed slowly to not only see how the body is moving but also feel the movements.

The importance of rolling forward, over the toes and not stepping forward was noted as a basic element to be worked on. Driving from the hips to rotate in any movement was accentuated, and will give power and strength to the movements. A central element highlighted by Kawasaki Sensei was that although driving originates from the hips, the body should never tilt or lean at any angle away from the central axis of the body. Incorporating turns, for which Shotokan Karate is known, should be precise and clean. There should be no uncertainty of where you are turning to and that you have finalised the turn with determination, upright and without wobbling.

Basic techniques practised slowly, with a focus on incorporating mind and body in the execution, worked up quite a sweat and we can attest to happy muscles after the class.